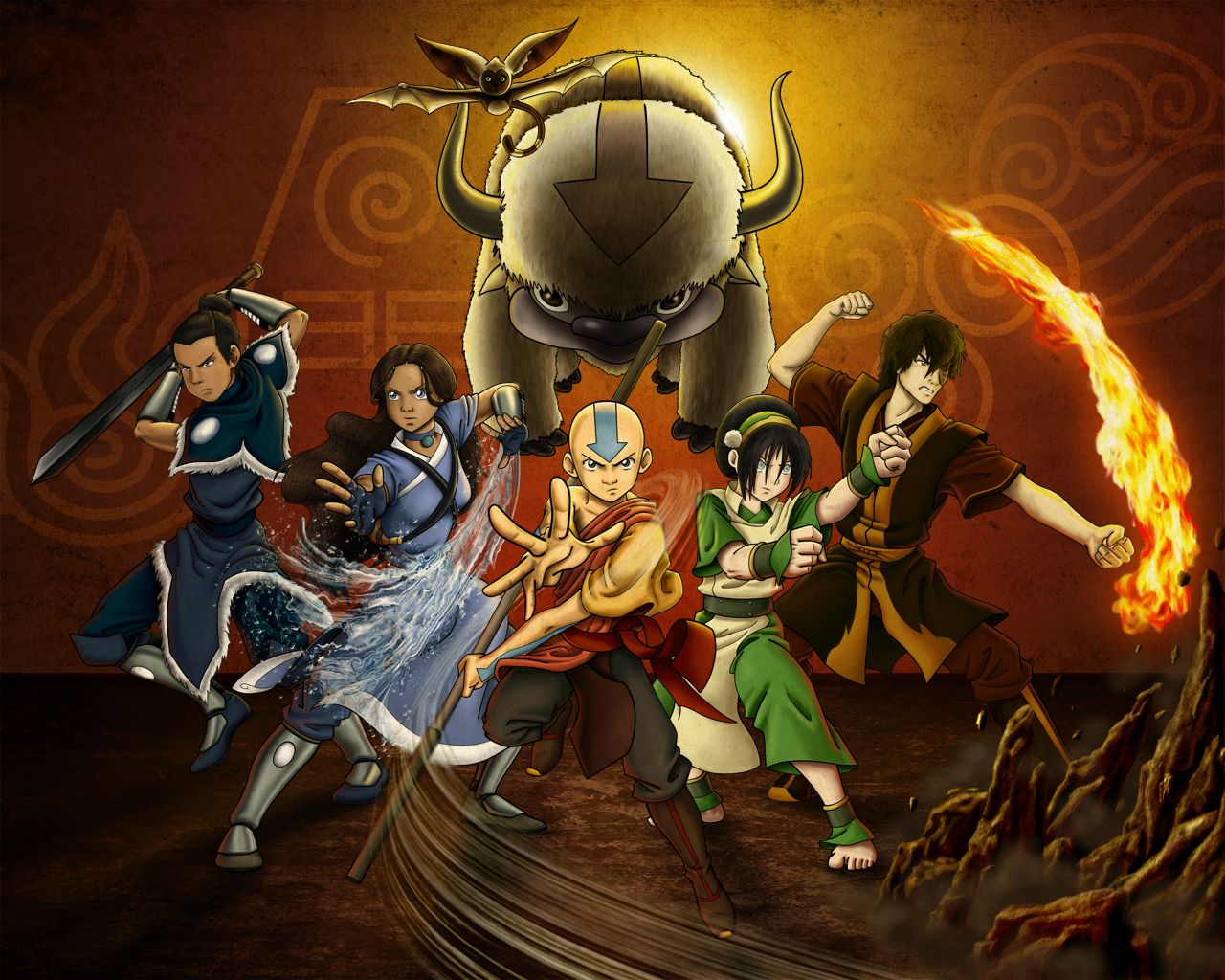 As a practitioner of multiple martial arts myself, I have a deep appreciation for the detail that the creators decided to incorporate in the fighting styles of this series (among other things.) Below is each form of bending with a description of their real-life inspirations. 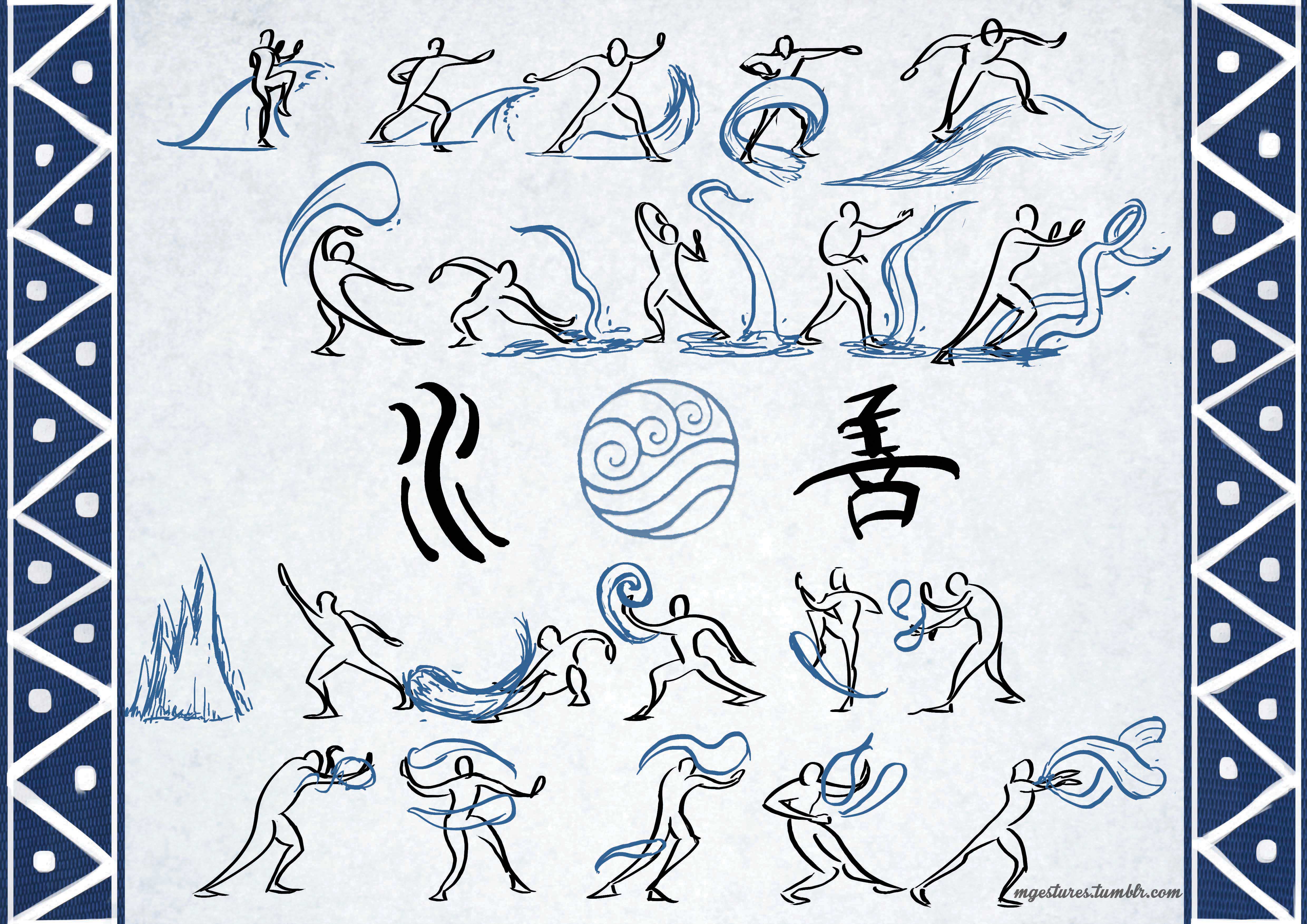 Waterbending is based on a style of T'ai chi ch'uan, specifically the Yang style. It is a Chinese martial art that features slow movements and elegant forms that evoke the feel of flowing water.

Like tai chi, a waterbender's main advantage is the ease with which he or she can control his or her opponent, not simply harming them. Both arts were influenced by ancient healing practices; people would channel their "energy paths" within themselves to areas of the body where healing was necessary. They also share a specific focus: body alignment, breath, and visualization. Finally, a waterbender can typically find that softness and breathing are more effective for his or her ability than hard aggression, just as a practitioner of tai chi does. 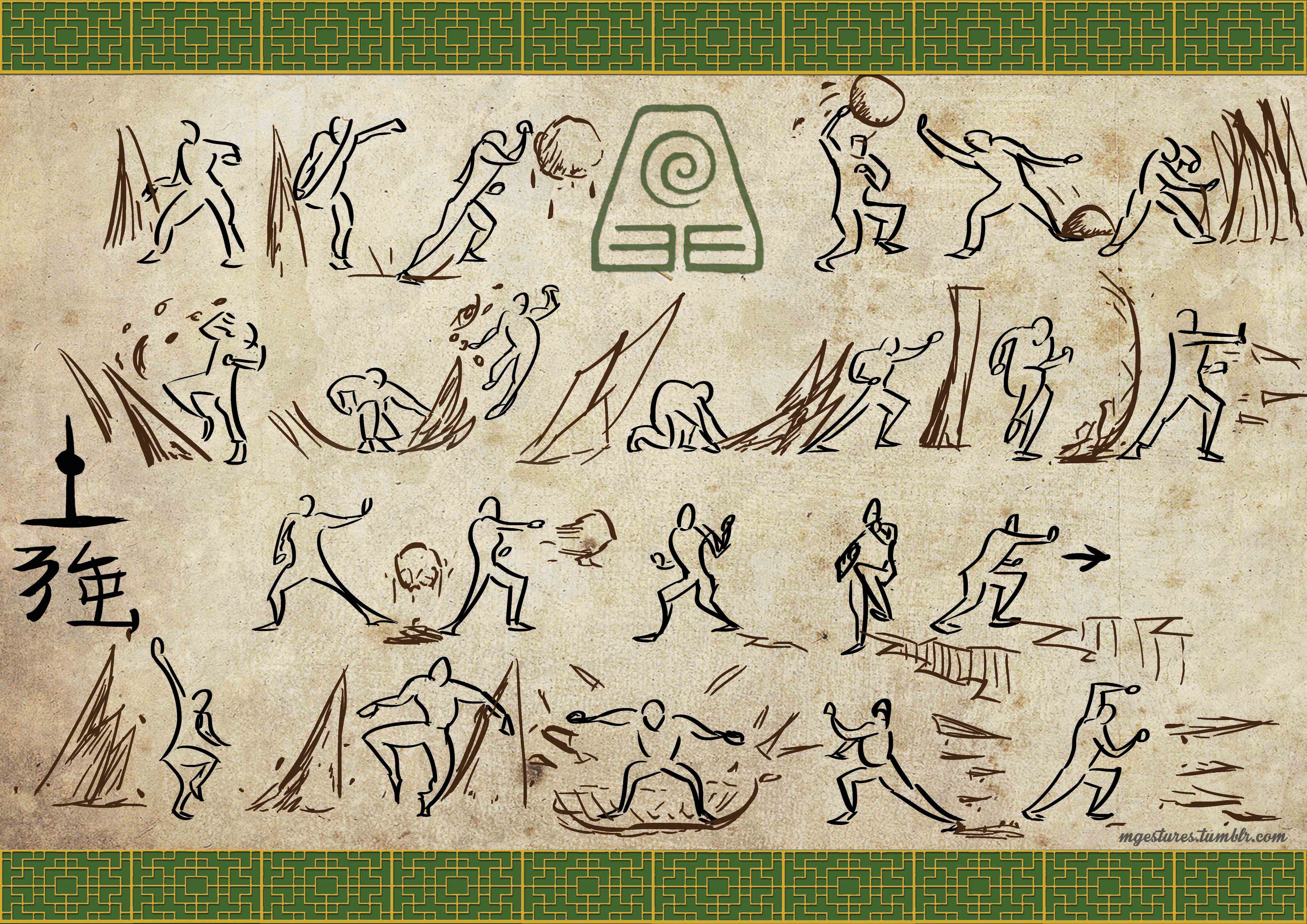 The Hung Gar style of kung fu is the main influence for earthbending; they both feature "heavily rooted stances and strong kicks and punches that evoke the mass and power of earth." Hung Gar itself parallels animal movements such as the tiger's hard blows and the crane's affinity to landing gracefully on the Earth. There are exceptions to this rule — Toph, the blind earthbender's style, is based on Southern Praying Mantis, a precise stepping skill which Toph uses to maintain constant contact with the ground and "see".

The concept of neutral jing is also closely related to the philosophy of "sticky hands", a practice common to some southern Chinese martial arts such as Chu Gar Southern Praying Mantis and Wing Chun. The purpose of sticky hands is to enable the practitioner to predict their opponent's next move. Similar to Toph detecting the movements of others through her connection with earth, a practitioner learns to detect their opponent's upcoming move by maintaining constant contact between their own arm and their foe's arm (may also be between their hands or wrists). By practicing with a partner in this manner, a practitioner will learn to "read" the slight movements of their opponent's arms to detect their next attack and subsequently move accordingly to either strike before the attack is made or move in the same direction with the attack and effectively neutralize it. Concepts such as listening, reacting, balancing attacks and defense, and drawing power from a stable lower body are often referred to in the practice of sticky hands, again, closely relating to many primary concepts in earthbending. 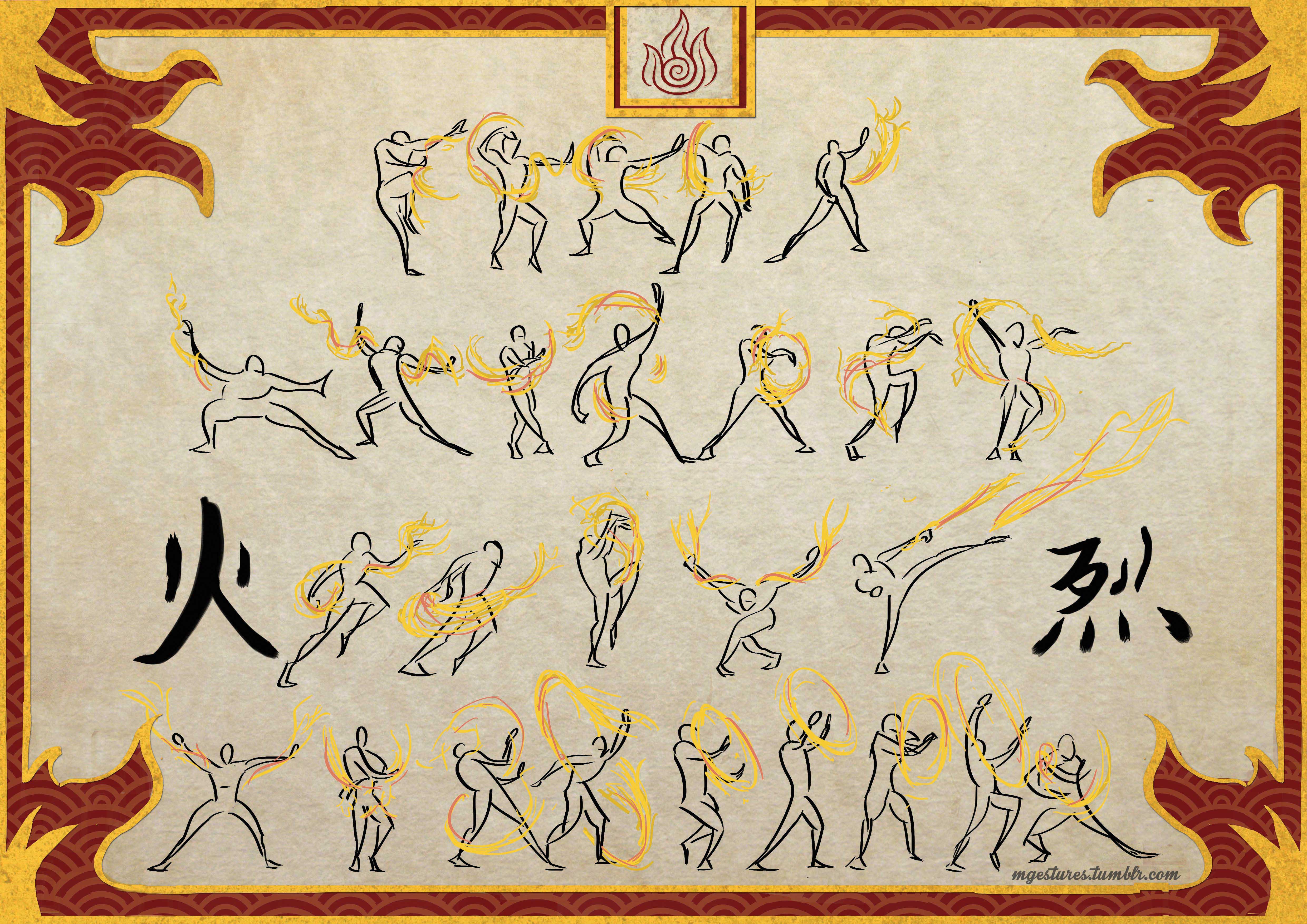 Firebending moves are based mainly on the Northern Shaolin style of kung fu. Aspects of the firebending combat style can be seen through the similar emphasis on highly technical kicking strikes, fundamentally strong movements, and the usage of swift, direct maneuvers. Northern Shaolin is an external style that uses long, aggressive techniques that explode and drive through the opponent.

The Northern Shaolin style emphasizes "kicking over hand fighting", or prioritizing one's legwork as opposed to the arms. Kicks are meant to "extend as far as possible without compromising balance. A few techniques from Northern Seven Star Praying Mantis are also prominent. These martial art variants feature quick, successive attacks that utilize momentary bursts of extreme power, much like an explosion, called ging lik. It optimizes a strong continuous offense, sacrificing defense for greater power, the principle behind a pre-emptive strike, and as such, firebending is categorized as the most aggressive of the four bending arts. 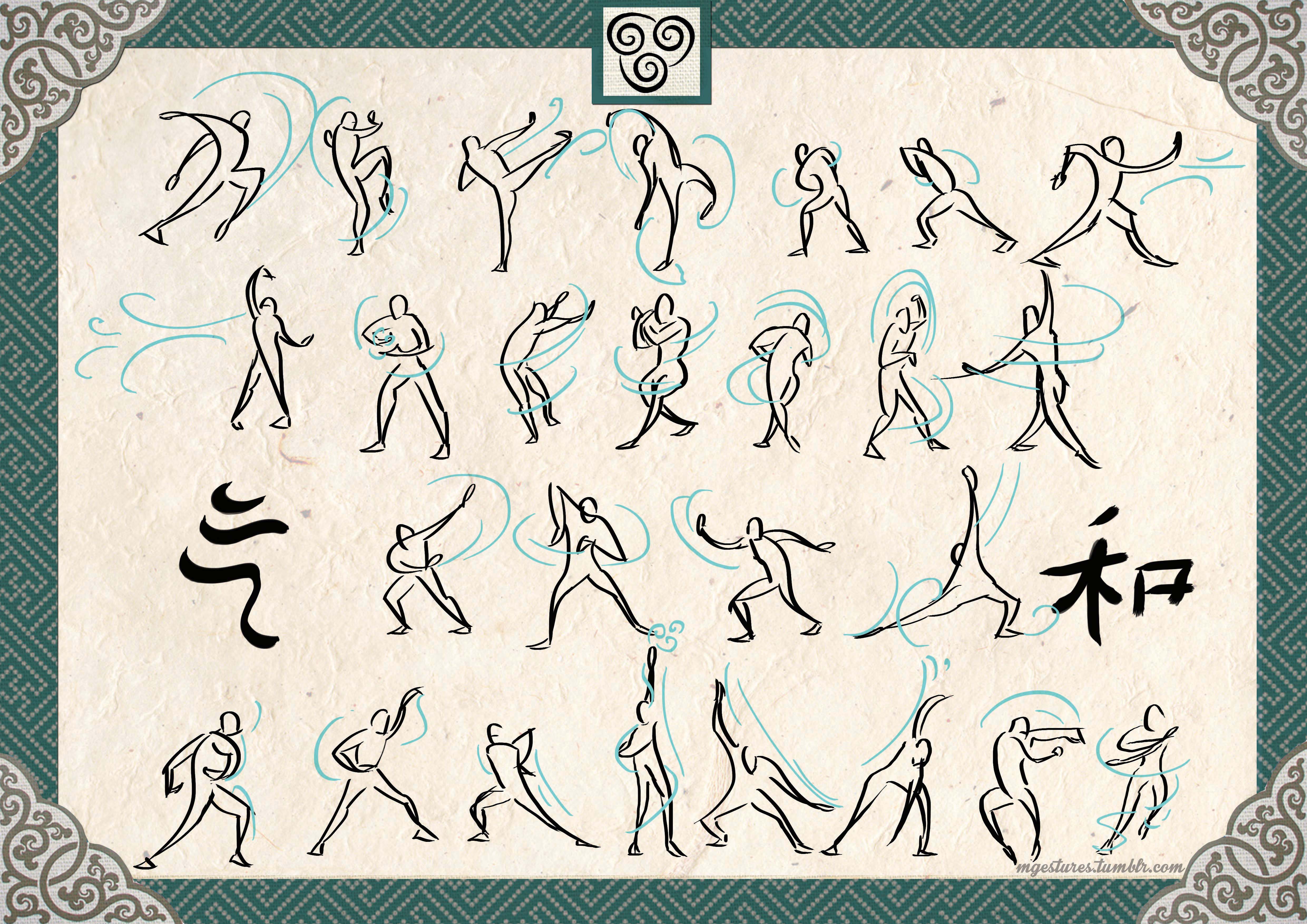 Airbending is based on the Baguazhang style of martial arts, also known as "circle walking" or "Eight Trigram Palm", along with a small hint of Xingyiquan, also known as "mind heart boxing". Baguazhang involves "smooth coiling and uncoiling actions". Such moves employ dynamic footwork, throws, and hand techniques. These martial arts feature swift, evasive maneuvers that evoke the intangibility and explosive power of wind; drawing energy from the center of the abdomen.

Ba Gua, which utilizes circle walking of the Eight Trigrams, is known for its constant circular movement, which makes it difficult for opponents to attack directly or land a blow, a philosophy that is prevalent within airbending as well. Maneuvers employ the entire body with smooth coiling and uncoiling movements, utilizing dynamic footwork, open-hand techniques, punches, and throws. A common tactic is to maneuver behind an opponent and mirror their movements, preventing them from turning to face the practitioner, similar to the technique Aang used during his fight with Hide.